Tweets by EarlyMusTheory
We don't store any information with your browser when you visit, but Twitter does. This can be prevented only by avoiding pages with a Twitter feed – currently only the EMT homepage.

The Early Music Theory website was founded by Ronald Woodley in 2013 as an evolving scholarly resource dedicated to a variety of issues relating to the notation and intellectual context of music in the medieval and early modern period, as well as to the inter-relationships between these issues and musical performance and composition.

This open-access resource is intended to be an online focus for a wide range of high-quality material relevant to musicologists, historians and performing musicians with a serious interest in such areas of study. If you are involved, either as an academic researcher or musical practitioner, in areas of early music that impinge especially on theory and notation, or their wider historical, compositional or performance contexts, and you wish to propose material for inclusion on this site, please feel free to contact us.

The first theorist to inhabit this space is the fifteenth-century musician and lawyer Johannes Tinctoris (c. 1435-1511), whose life and works have been the subject of the ongoing research of the site’s founding editor, Ronald Woodley.

An edited collection of essays and studies addressing aspects of Tinctoris's output and impact.

The legacy version of the Tinctoris project, hosted by The Stoa Consortium, is still available, but in due course it will be subsumed completely within the new site.

Some of the material on this project site has been submitted to the UK Research Excellence Framework (REF) 2021. See notes on REF 2021. 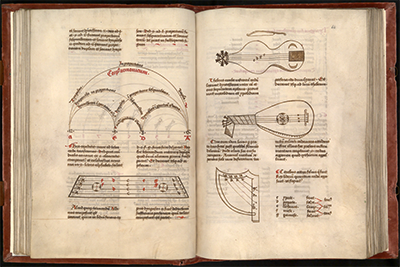 An opening from De diversis monochordis etc. in Ghent, Universiteitsbibliotheek, MS 70, copied in Ghent by Anthony van Sint-Maartensdijk, before 8 November 1503.